Homemade gifts have been a part of my holiday gift-giving strategy for several years now. And it is not because I love crafting and think that everyone would just be so happy to receive something that I've made…. um… no. It is really a matter of budget. Because if I purchased a gift for everyone on my gift list and spent what I would like to… it would cost thousands. 6 kids multiplied by the number of teachers, learning support specialists, teaching assistants, coaches, and instructors that touch their lives adds up to more than 30 people. Throw in my husband's co-workers and other friends that are important to me and my family…. and it is a whole lot of people that we care about. It is my belief that a homemade gift tells the recipient that I appreciate them and all that they do for my family, and hopefully allows them to feel how much I care- as evidenced by the time and effort spent in making the gift.

So this year I came up with the idea of glass etching a snowflake on the back of a plate- which I plan to fill with holiday cookies and treats for 24 people on our gift list. The others on our list will receive homemade baked goods beautifully packaged- but without the plate. Here's how I did the glass etching…. 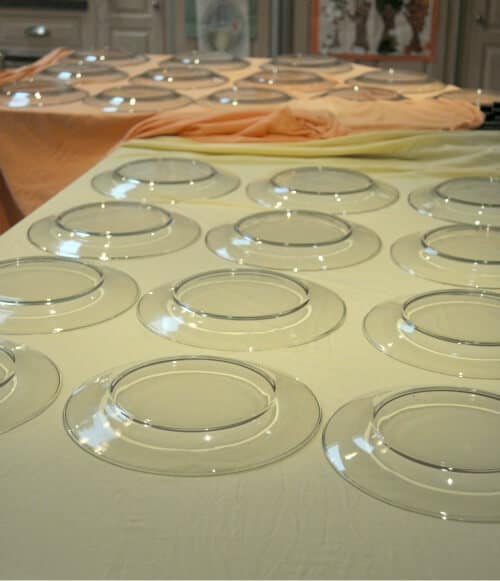 I find it easiest to make so many of these if I take it one step at at a time and execute that step for all of the plates that I am making. Since I will be doing the etching on the back of the plate, my first step was to unload the 24 plates from the boxes, and set them up on my kitchen counter- on top of a sheet to protect them from contact with the solid counter surface. Of course it is a rule somewhere that all glass products come with a damn sticker somewhere- one that won't easily peel off (and yes, I get it if it is price tag- but these plates were sold as a box of 12, could  they have just left off the stickers?) Fortunately, the stickers were on the edge of the plate, so for now, I just peeled them off, and will deal with the sticky residue later after they are etched. (Last year I used Goo-Gone to remove the residue at this point, but then had to wash and dry all of the glass bowls to get rid of the Goo-Gone….. what a pain).

I then used Windex sprayed on a paper towel to clean off the area where I will be applying the glass etching. Those plates can be dirty just from sitting in boxes, and you'll want a clean and dry surface to start with! 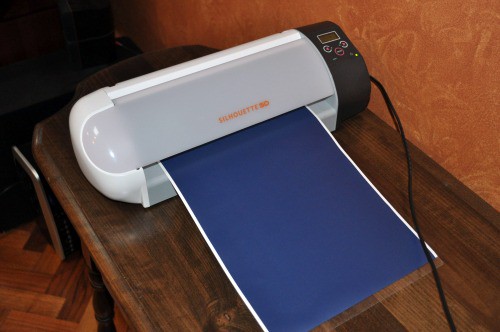 I created the snowflake stencil using my Silhouette craft cutter (which I love love love). I found the snowflake shape that I wanted in the Silhouette online store for 99 cents, downloaded it to my computer and then used it to create a layout of 4 snowflakes on a 8 1/2 x 11″ piece of vinyl.

I cut the vinyl to length (it comes in rolls) and then laid it out and smoothed it onto my cutting mat, using the stickier of the two mats that came with my machine. I then sent the stencil to the cutter and let it work it's magic. 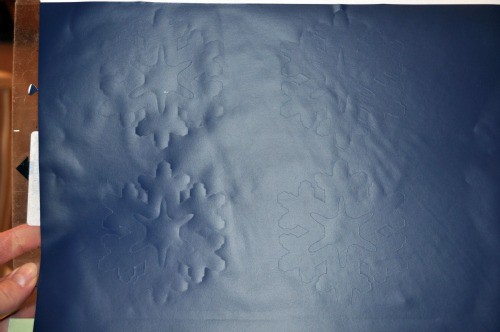 Step 3: Applying the stencil to the bottom of the plate 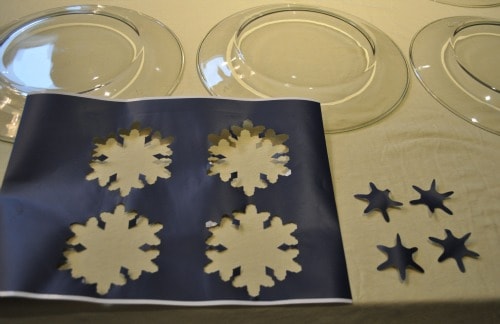 This is the trickiest part of the process. I cut my vinyl into 4 square pieces one for each of the 4 snowflakes, leaving as much room all around each one as possible, so that later when I apply the etching cream I have a nice border of protection to block the part of the plate that I do not want to be etched. Removing the vinyl from the sticky mat can be challenging; many times pieces will remain stuck to the mat. But that is okay- what you are looking for is the “negative space” of the stencil- because you will apply the etching cream into that negative space to create the snowflake.

When actually applying the vinyl stencil to the plate, you want to try your best to only allow it to touch down only once- because if you allow it to touch the plate and then try to remove it to re-position it, a sticky residue will be left behind that you will need to remove carefully before applying the etching cream. It is a bit of challenge to apply the stencil all at once, smoothing it out to allow it to lay flat without air bubbles. But after a few tries, you'll get the hang of it!

This stencil also requires a middle piece to be applied (the star-shape) in order to achieve the snowflake look. And you'll see that I also applied some leftover pieces of vinyl around the edges of snowflake where I wanted to leave a little more of a protection zone for areas that I do not want to be etched. Once I finished applying all of the stencils, I cleaned the plates again with windex sprayed onto a paper towel- mostly to remove any fingerprints that could interfere with the etching cream process. 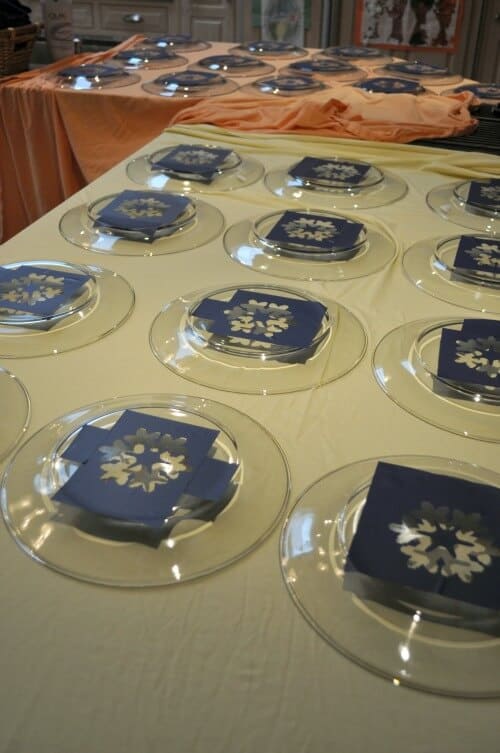 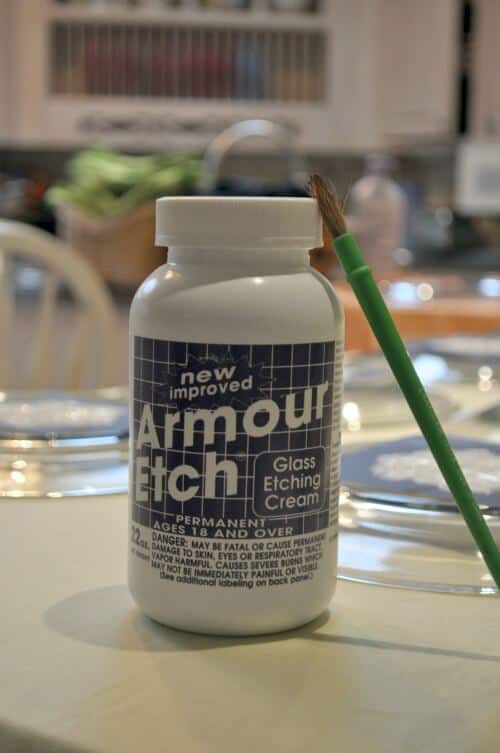 I used this Armour Etch cream that I purchased at my local craft store and a plain old kids paintbrush to apply the cream to the negative space of the stencil. I applied a very thick layer of the cream (thick enough that I could not see through it), and applied it from the outside in, in a kind of sunburst pattern over the snowflake. The directions on the bottle suggest that you wait 5 minutes before rinsing off the cream, but I applied the cream to all 24 plates before starting to rinse them, so it was more like 45 minutes that it ended up sitting on the plates. 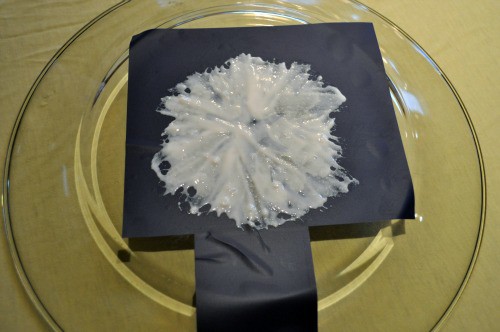 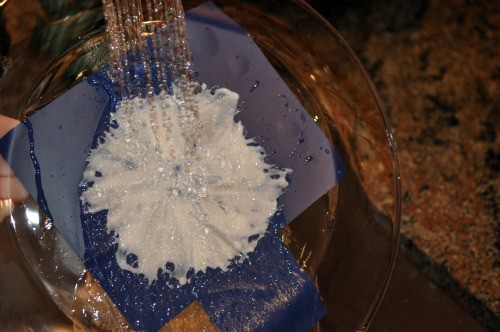 After at the cream has set on the plate for at least 5 minutes (or as I said… quite a bit longer), it is time to wash it off. Simply hold the plate under running water and using your fingertips, wash off the cream. As the plate becomes wet, the vinyl will start to peel away which is fine. Remove the vinyl and finish rinsing the plate completely. 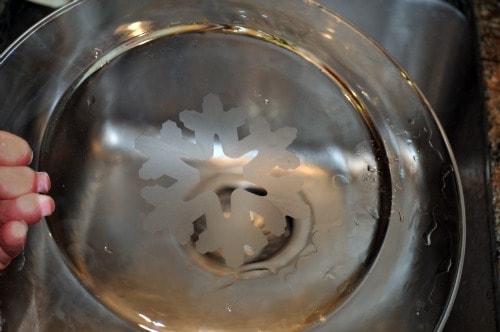 And that's all there is to it. After rinsing all of the plates, I went back and used the Goo-Gone to remove the remaining sticky residue from the stickers that had been on the plates. And then I stuck all 24 plates in the dishwasher for a final wash and dry- because the glass etching is now perfectly dishwasher safe! It will not wear off. And after all of the chemicals and handling of the plates- I wanted to wash them thoroughly before adding the baked goods on top (which I will do in 2 weeks the day before we distribute our gifts). 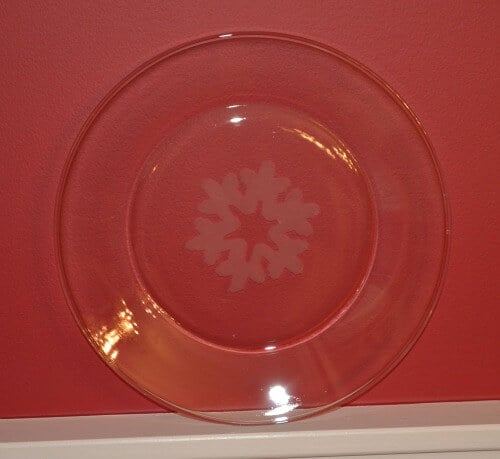 So- what do you think?