This is one of my favorite stories about my kids… because sometimes they just surprise you! 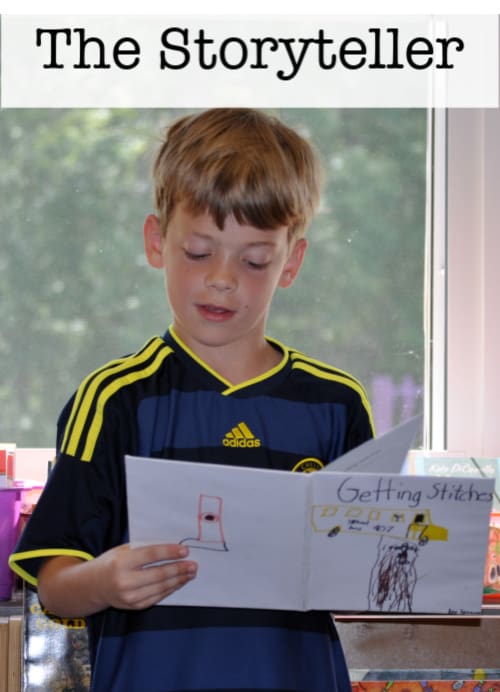 Tuesday morning was one of those super-crazy “get-everyone-up-and-fed-and-out-the-door” types of mornings. No one woke up on their own (a rarity around here) after the long weekend, they were all sluggish to get moving and took forever to chow down on their waffles at breakfast.

Adding to the crazy was the fact that we had to leave 30 minutes earlier than usual in order to drop off my son Jack at his 8 am violin practice. The other four elementary-schoolers then had 20 minutes to hang out with Mom before it was time to catch the bus to school.

I have no idea on how the topic of Santa Claus came up in the car as we were returning home from dropping off Jack- but one of my younger believers started asking questions about when Santa would be coming this year and what some specifics on the logistics of how Santa delivers all of the presents.

I started to feel my shoulders tense-up because my 9-year old Spencer was in the car, is clearly a non-believer, and also possesses the traits of being blunt and honest and generally likes to be “right”.

I braced for an onslaught of harsh truth-telling to occur and started to think ahead as to how I was going to re-direct this conversation- when instead I heard the most marvelous story start to be spun right out of the air, by that same 9-year-old, who also happens to possess the traits of adoring young children and is a fantastic storyteller.

I was entranced as he told a tale about being 5 years old on Christmas Eve and hearing a noise downstairs. Knowing that Santa would never leave him presents if Santa saw him, Spencer hid behind the kitchen counter and watched Santa work his magic.

He talked about how the reindeer came inside the house too, and Santa threw the big handful of carrots we had left for them into the air, and the reindeer leaped up and each caught a carrot in his mouth.

He said that Santa didn't eat all of the cookies that we left out but instead swept them up into a big bag, which he took back to the North Pole to share with all of the elves that had worked so hard to make our toys.

He said that Santa had a magical way of cleaning up all of the mess left behind by the reindeer in our house and that when Spencer looked down, even his own knees which had been dirty when he went to bed, were clean.

My youngest three peppered him with question after question and he just continued to add detail to his story- and they were drawn into his every word.

We had a few moments before we needed to be down at the bus stop, so we stopped back at the house so that Charlotte could change her shoes, and Spencer used this as an opportunity to take them on a tour- to show them exactly where he had remained hidden in the kitchen while he watched Santa, the chimney that Santa used to leave after delivering the presents, and the door the reindeer passed through to make their exit.

Then he took the kids outside to show them where he stood to watch Santa and the reindeer on our roof hook back up to the sleigh and fly away. They followed him like baby ducks to their mother- hanging onto everything he had to say.

We then hopped back into the car and headed down to the bus stop- but the questions wouldn't stop, they wanted Spencer to tell the whole story again and again.

And when we met up with another boy on our street waiting for the school bus (whom I am guessing is also a non-believer), Spencer met this young man's eyes and his friend understood perfectly that Spencer was telling a story. The friend went right along with it- just listening, not embellishing it at all, which might have made it turn too silly.

My young man Spencer gave us all such a magical start to our day- that even hours later as I sit here typing this, I can still feel the glow.