While I enjoy some time off with my family, I would like to share with you some of my favorite blog posts from the past. So here is today's Momof6 Memory…

Under the header of “Things You Wished Your Mother Would Have Warned You About…” comes the concept that kids and pets go together. Now some of your garden-variety pets are of the furry and cute kind… like this adorable face here: 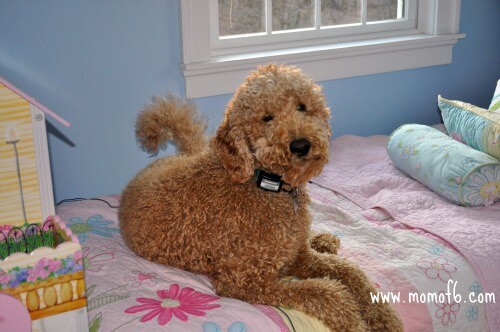 (Please note that this dog does NOT belong lounging around on my daughter's bed! But like the kids, he has selective listening skills!)

And some are more along the variety of “sure, why not let kid have a fish / hermit crab / hamster / guinea pig….. because it's not going to be around for long anyway.” Yeah, right.

Nearly three years ago, my kids begged me to allow them to play one of those carnival games where you have to bounce the ping pong ball into a little fish bowl to win the prize- which was a goldfish. I figured why not? There's no way that they are actually going to get the ping pong ball into one of those little jars… (I mean don't they rig those carnival games so no one ever wins?).. and even if they do, the poor little fishie will probably go belly-up before the end of the weekend.

Well, wouldn't you know it? We won two.

So we dumped the two of them into a fish tank that we already owned (I once had a goldfish in college), and after driving from store to store, eventually hitting every pet store in a 30-mile radius of our house, I was finally able to round up some goldfish food (duh- every other kid in town won a goldfish at the same carnival, so there was nary a flake of fish food to be found!) for our new “pets”. But when I got home, even after I started tossing food into the tank… the bigger fish kept picking on the little fish… biting his tale, chasing him around the tank, and calling him names! We had a full-fledged bully on our hands! And the kids were getting upset….

So off I went back to the pet store, to purchase another fish tank set up, for the goldfish that we had won at the carnival. Lucky, lucky us. 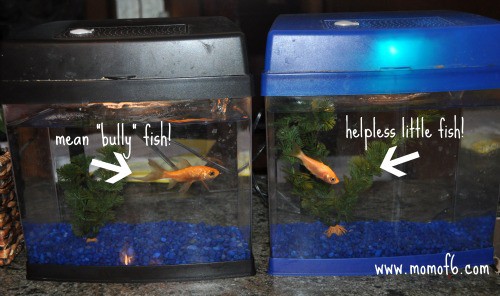 So now we had two fish in two fish tanks…. to feed… to talk to… to clean their icky tanks when they become so green that you can barely see the fish anymore. Thankfully, the kids have learned the tough lesson about pets and responsibilities. Not.

Three long years we've had these little lovelies. And just for reference, I looked it up just now on wikihow, and goldfish live on average 6 years! Who knew? And according to the Guiness Book of World Records, a fish named Tish lived for 43 years after being won at a fair in England in 1956! (I think I'd better go and update the will….)

So you would think that I learned my lesson and put my foot down when it comes to owning some more “simple” pets, right?

Every year at our elementary school, each grade learns about one type of animal in science class. My favorites are the butterflies and the newts… because when the kids are done with their lesson, these critters are released into the wild- where they can be happy and free. But other grades study animals that can be taken home as pets, after the class has completed their studies- provided the little things are still alive after being handled by 20+ inquisitive grade-schoolers day after day. And to determine which kids get to take home the critters, the teachers hold a lottery- sending home a permission slip to make sure that you will allow such a creature reside in the comfort of your own home. Now what kind of parent can gaze into the hopeful face of their young-one and deny them the opportunity to “win the class pet”?

Which is how over the years I've become the not-so-proud parent of one crayfish (who ultimately died a hideous death in front of all of the kids when he became stuck in his shell while molting), and one hermit crab who now goes by the name of Caitlyn. And is about to turn (at least) one year old (she's not telling us her real age). 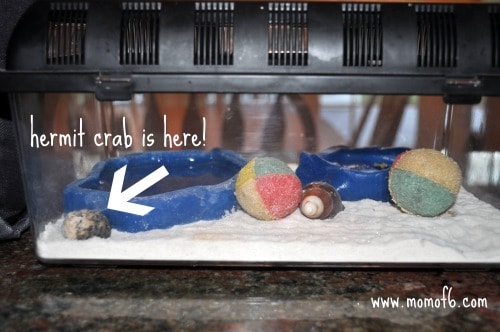 So I'm just telling you…

if you cave into the whims of your children and go ahead and allow them to have a pet, it might be living with you for a long, long time. You've been warned!