As a parent we all know that there are plenty of times when siblings bicker with one another, when possessiveness of toys or jealousy over privileges that come with age get in the way of “just getting along”. That's just part of life- especially in a big family.

But then there are those times when you get to sit back and witness acts of true friendship between siblings- when one child teaches another how to throw a football with a perfect spiral, or when one demonstrates for another how to draw a picture of a butterfly.

But when admiration for a sibling turns into personal inspiration for one or more of them- well that's just an amazing thing to watch. 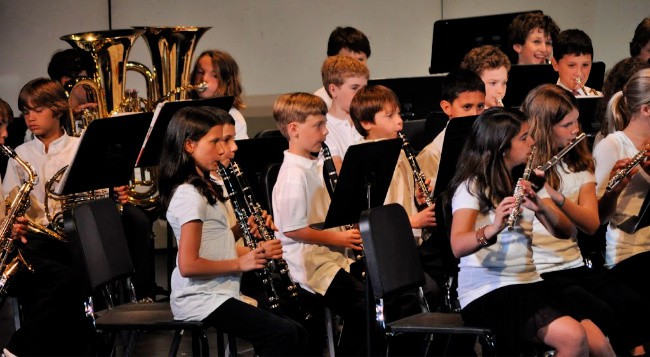 Our oldest son Kyle decided to participate in our elementary school's band program by studying the clarinet in 4th and 5th grade. He was enthusiastic about learning how to play and told us how much he enjoyed it, but the first year I could barely motivate him to practice at home.

And with our busy schedule, it was easy to allow weeks to go by without getting him to take his clarinet out of the case even once at home to practice.

When 5th grade started, Kyle told me that there would be an opportunity for some band students to be invited to play in the “district band” which is a group pulled together of the best (and presumably most dedicated) students from all 5 elementary schools. This group would gather one morning a week to practice before school and would participate in several special district band concerts during the school year.

A week or two later he asked me if I had received a letter in the mail inviting him to join the district band- but I had not, and so I decided that while my son might be disappointed that he wasn't included in this special group, this would be a perfect learning opportunity for him to understand that it takes dedication and practice in order to excel, and he hadn't put in the effort up to this point. So I sat down with him and had this whole big discussion about effort- and about how we can't be “naturally gifted” at everything we try, sometimes we need to work at it- and so on.

Of course the very next day he comes home from school clutching the letter from the music teacher with his invitation!

Because apparently my son is somewhat “naturally gifted” when it comes to the clarinet (something I would only know if I actually heard him practice) and his band teacher had followed up with him to find out why his permission slip wasn't yet signed by his Mom to allow him to join the district band! 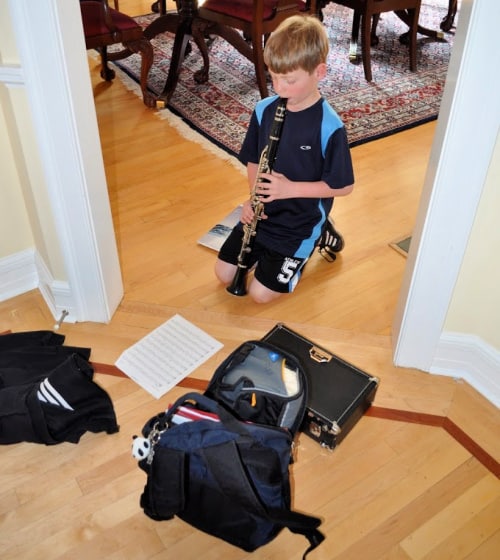 Over the course of the school year, Kyle did start to take out his clarinet more often at home to practice his pieces for both the school band and the district band. I even received an email from his teacher asking permission for Kyle to be featured in some instructional band videos for the school website because he was such a dedicated player.

And during the last two weeks of school, his teacher sent him home with another instrument to “try” over the summer- the oboe. Kyle was thrilled that his teacher thought enough of him to allow him to borrow and get to know this new instrument. Now he's the only kid in the 6th-grade band playing the oboe!

Now while all of this is a cute story about Kyle and his hidden musical talents, the other unforeseen bonus in all of this is the way that it has inspired my younger children to want to play an instrument as well- and to actually put forth some effort into practice time!

I now have a son who is in his second year of playing the bass (you know, the HUGE strings instrument that is taller than him and weighs nearly the same!), and a son who is starting to learn how to play the violin.

And I have three younger children who cannot wait until they are old enough to play too- and they spend hours talking with each other about which instrument they want to pursue- with their answers changing nearly every day.

Now when I casually throw out the suggestion that they each need to practice for 30 minutes after dinner- they practically race to their instrument cases, and before long the sounds of a symphony warming-up quickly fills my house.

I am not going to claim that the music sounds sweet when all three of them are practicing! In fact, it is usually loud and not always very “musical”. But their enthusiasm is genuine.

And their inspiration from their oldest brother is undeniable.