When the kids were little, one of the questions I was asked over and over was how I managed to get out and about with the kids- especially when it was just me and the crew (without my husband along to help wrangle our large family). So here are my tips on getting out with kids! 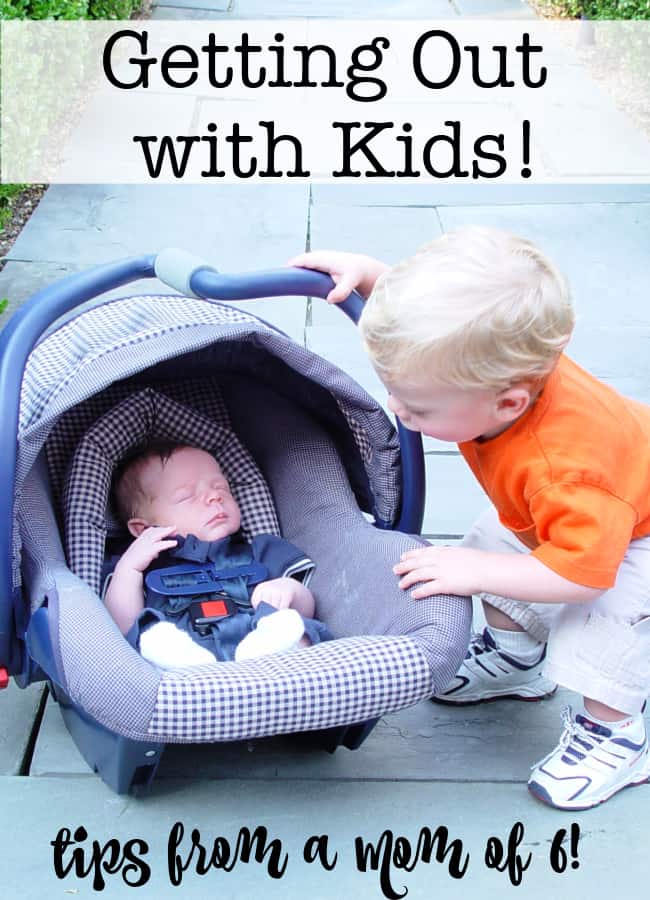 Getting out with the kids used to be a HUGE source of stress for me when they were younger, because they far outnumber me, I couldn't hold everyone's hand in the parking lot, and it was a lot harder to prevent someone from dashing ahead of me in a store and getting out of my range of sight!

But once they were out of the toddler-years, the issues became more about getting them to stop teasing or bickering with each other so Mommy doesn't lose her mind!

So here is how I handled running errands or going to the grocery store with six kids in tow (mind you, I generally try to do my shopping and errands without dragging along the kids- but there are times)…

Getting Out with Kids- Exiting the Vehicle!

Yesterday I had a doctor's appointment, and when I pulled into the parking lot to hunt down a parking space, I saw several Moms unloading strollers and baby carriers from their cars in order to transport their little ones into the building.

And it made me remember those days when I could strap my babes into their own personal vehicle like that, and push them along in front of me, knowing that they were snug and secure, and unlikely to escape and run through the parking lot dodging cars!

But once kids are mobile- they want to move on their own!

Now I happen to drive a car that is more like a bus– and one of the nice things about this car is that everyone gets in and out of one door. I also exit from the same door (my car is tall enough that I can walk around inside of it)- so I don't need to worry about one of the younger ones opening the door and escaping as I am finding my handbag! We all exit the car together.

When they were younger I used to do a bit of a hand-holding chain- linking two or three of them up on each side of me, with the youngest two next to me holding my hands, and the older ones holding their hands.

The problem with that idea, although I felt that I securely had them all, is that we made a rather wide chain crossing the parking lot. Even if I pulled forward in a kind of “flying geese” formation, it still took up too much room- but sometimes it was just the best way to move!

As they grew older, I hooked them up in pairs as “partners”, a younger one with an older one, and let them hold hands in twos.

Then it always became a question of whether to walk in front of the pack, leading the way and urging them forward, directing them where to go (and around the puddles), or walk in the back of the pack, making sure that no one straggled behind and became more interested in the penny on the ground than in keeping up with Mom.

So I compromised, I walked in front, with my head turned around like an owl half of the time! 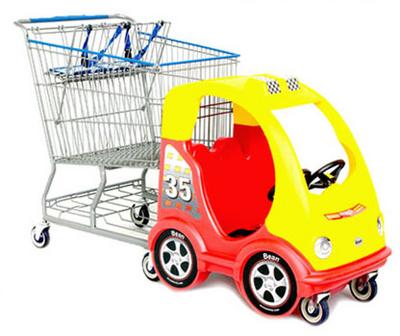 Reflecting back on the earlier years when it was just me and one or two babes, I remember carrying one of those cloth liners to put in the front of the shopping cart, creating a little germ-blocking environment for my precious tyke.

I would wipe down anything he might touch with a sanitizing cloth, and then carefully place him inside, along with a snack and a few toys to occupy him while I went about my shopping, often pausing to sing him little songs and plant kisses on his head.

These days when I hit the grocery store with the six kids, I start scanning the parking lot as I pull in for any signs of those huge unwieldy car-carts. And when I find one, I park next to it and hop out and snag it before I even begin unloading the kids.

The two youngest pop into the car cab, (without me even peeking in first to see how disgusting it might be), and immediately start “driving” their car by putting their hands all over the plastic steering wheels (which were likely last touched by one kid with a bad cold and his sister with strep throat).

I ask the other kids to follow closely behind me as I try to maneuver this giant cart through the aisles of the store, and it works out pretty well.

Handling Trips to the Bathroom!

Before we leave home, I try to remember to remind my children to all use the bathroom. I tell them quite plainly- there will be no potty stops while we are out running errands- that they will need to wait until we return home.

I do this because I had children, who once they figured out that the store had a bathroom, would insist that they need to go. But I know that they just want to see the bathroom!

So my first rule of public bathrooms- is avoidance.

However, on longer outings, going to restaurants, and certainly on road trips- that just isn't possible. So the next thing I was faced with- was whether or not to allow my three older boys to go into the men's room without me, or to drag them all into the ladies room with me.

Moms of boys- we all face this issue at some point!

So my rule became that they could use the men's room- as long as all three of them entered the men's room together, waited inside together until all three were done, and then exited together. And no talking to anyone else while in there.

In restaurants, I will allow us to go in groups, older three alone, and then younger three with me while the older three stay at the table. (When they were younger that I would tell the wait staff not to be alarmed if they came by the table and we were all gone- we would just be in the bathroom!)

Getting Out with Kids Requires a Good Reward System!

I am certainly not above a good bribe, er- I mean a “reward system” when it comes to errand-running with my children. Sometimes it is just the incentive they need to keep them well-behaved and on track for the duration.

I used to get by with the little dum-dums lollipops, but then it evolved a trip to the Golden Arches, which was fine with me because after hitting the store with all of them, an afternoon off from making lunch was a reward for all of us!

Want to Learn More About Getting Out with a Large Family?

And check out this video series, “Flip the Script”

Where I challenge my fellow busy Moms to flip the script on something that challenges you- and give you a new way to think about it!

Check out the whole “Flip the Script” video series here!

« Planning an Outing with Kids {When You Have So Many!}
Summer Salad with Tangy Raspberry Vinaigrette, Dried Cherries, & Goat Cheese! »