I think one of the reasons why people are so intimidated when I talk about taking a long road trip with just me as the only adult along with six kids, is that they are worried about “what if something happens?”. But here's the reality….. It is likely that something WILL happen. Sometimes stuff happens when we are close to home- trust me, I've taken a kid to the emergency room for stitches because he fell down while boarding the school bus! And sometimes things will happen when we are on vacation- for example, last summer my daughter broke her collarbone while riding on an alpine slide in New Hampshire. So yeah, stuff is gonna happen. You just have to be calm enough to deal with it. 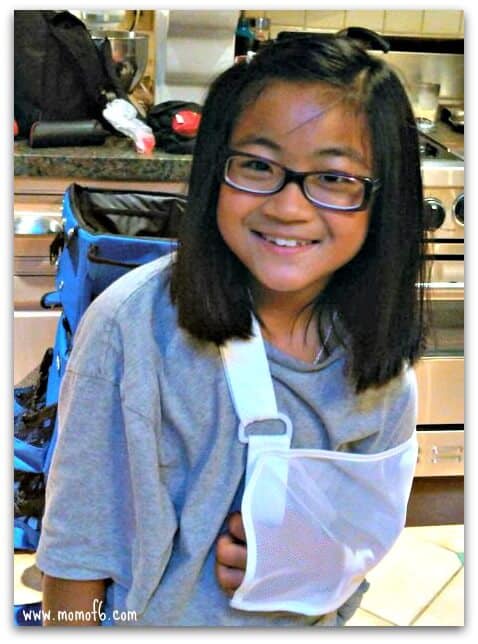 When we went to China in 2006 as a family, I remember being being really worried that “something could happen” while we were on this trip- knowing that we would be traveling with so many little kids. And sure enough during the first week of our trip, my son was running around in the hotel room where we were staying and he managed to somehow hit his head on the pointed corner of a glass coffee table, and basically split his scalp wide open. Steve, my McGyver-plan-ahead kind of guy- pressed on the wound to (eventually) stop the bleeding, wrapped his head in a piece of gauze secured by an Ace bandage, that he of course had packed for just such an emergency.

We had to take him to a urgent care center in a foreign country and have it stitched up. But since I am also a plan-ahead kind of girl, and knowing that we would be staying in one city in China for two weeks, I already had the name of an urgent care center, the doctor's name, and I knew where was located as well as their phone number! So when we encountered this emergency I was able to tell our guide exactly where we wanted to go to have Spencer stitched up. 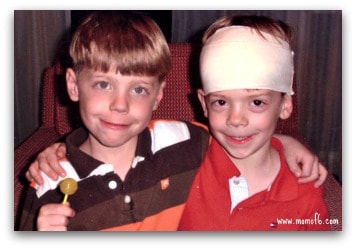 Planning ahead (or over-planning) worked in our favor in this case…. but it was a unique situation. We were traveling for the first time with three kids ages 4, 3, and 2 in a foreign country where I was felt unsure about the level of “Western medicine” that would be available to us, and we were adopting a 15-month old who might need medical care while we were on our trip. That's why I was over prepared. It gave me peace of mind.

But on this big road trip? I'm not researching the names and locations of emergency rooms and urgent care centers all along the route. I'll trust the fact that if we need one, I'll be able to find one. Instead I'm just going to focus on being mindful. I keep a first aid kit in the car, I keep a small stash of Band-Aids and anti-bacterial ointment in my purse, and I also have a first aid kit in my hiking backpack. I'll have my cell phone and can Google the location of the hospital or urgent care facility at a moment's notice should I need it. So instead of living in fear that something could happen, I live in the moment of being prepared, knowing that I can handle it if it does. Because emergencies can happen just hanging around the house, and I would much rather be taking my kids out to explore the world!

« When You are Traveling…. Try the Candy! {Road Trip Diary}
How to Pack for a Road Trip »