After spending the day at the Country Boy Mine in Breckenridge panning for gold on Monday, we made the beautiful drive down to Colorado Springs where we would meet up with my parents and stay in  a large Victorian rental home right in the heart of Old Colorado Springs. 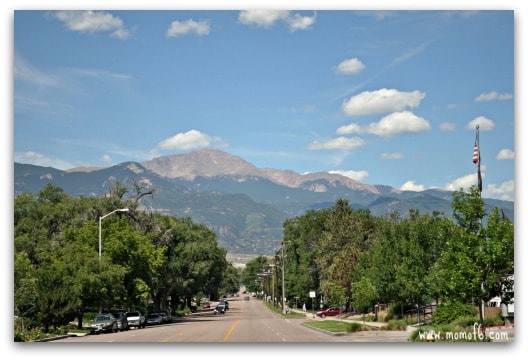 Unfortunately, my parents had weather issues to contend with which delayed their flights from Florida… but eventually we all met up- and the kids were thrilled to get to spend 5 days with their grandparents! 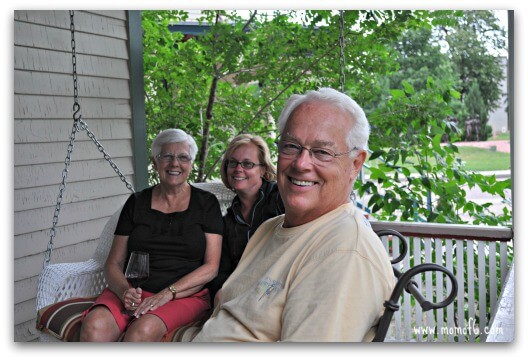 On Tuesday we explored nearby Manitou Springs- doing a little souvenir shopping, having lunch out, and letting the kids have fun in their amazing penny arcade! The arcade is a collection of shops that house every old pinball, skee ball, and arcade game that you can think of! Seriously- when was the last time you played an Atari game? The kids had a blast! And while the price per play is now a quarter rather than a penny, the kids were able to play for a few hours on just $20 worth of coins- quite the deal for us! 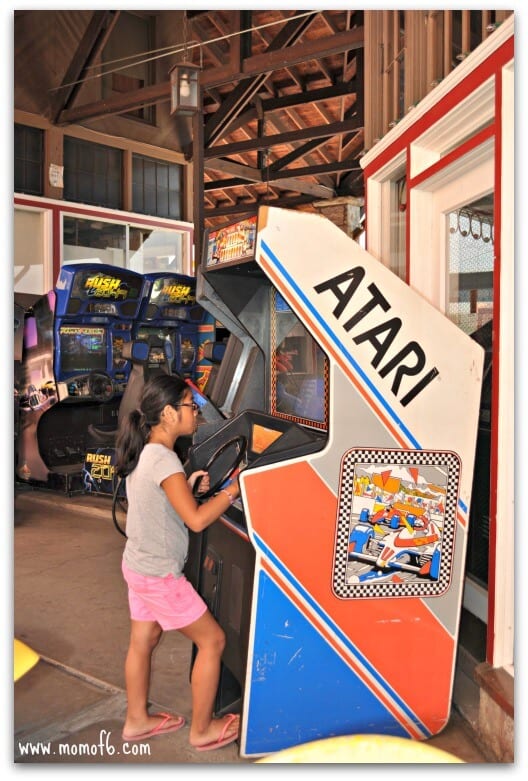 On Wednesday our adventures ramped up, as we signed up for a white water rafting tour with Echo Canyon River Expeditions. Because six of the seven of us going on the white water rafting trip were young kids, the manager decided to set us up with an oar boat rather than a paddle boat so the guide would have full control over both the steering as well as the “power” during our trip. When the kids heard this, they were hugely disappointed- and grumbles and complaints peppered the next hour- while I worked to get them fitted with helmets, life jackets, herd them onto the bus that would drive us to the drop-in point, and get them to listen to all of the safety instructions. And then they met our guide Morgan- who greeted them AND placed paddles in all of their “seats”. Yes, he still set the boat up as an oar raft- but he was going to give the kids a chance to show what they could do! 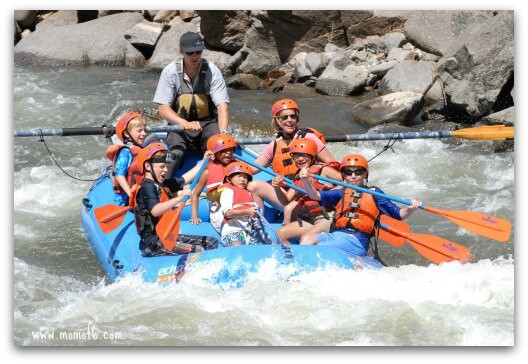 The white water trip was amazing! We navigated through rapids that ran from Class I through Class III (and of course, the Class IIIs were the most exciting!) Morgan made our trip extra special doing things that a lot of the other rafts in our group did not do- such as “thread the needle” where we went through and around some rocks in one part of the river. He did something called “surfing” where after we passed through a rapid, we then waited for the other rafts to pass and then we paddled up to the rapid, facing it and it was like we were surfing the rapid in place- it was a blast! Things got a little exciting during one of the rapids when we stopped to watch the other rafts behind us come through and we could see a few orange helmets bobbing in the water. One of the other rafters was struggling to get herself back to her boat, so Morgan had to do a little white water rescue and pull her into our raft- all while we were still navigating some turbulent water. But all ended well- and when we stopped for a mid-trip break further down the river, the lady was able to return to her own boat. 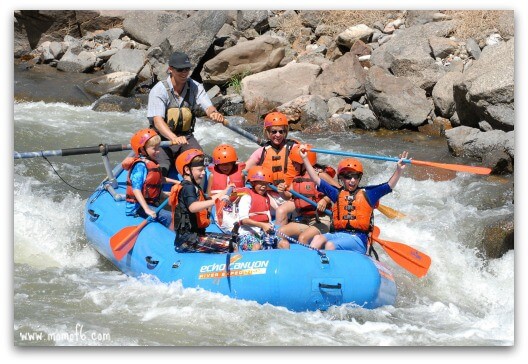 We had such a great time white water rafting and cannot wait for an opportunity to do it again!

On Thursday Kyle, Spencer, and I signed up with Pikes Peak Bikes to do a tour called “Saddle Up, Pedal Down”. The tour began with a ride up the mountain to the Stables at Broadmoor where we mounted horses for a beautiful one-hour trail ride through the mountain forest. After the ride, we were met by Scott, our Pikes Peak Bike van driver, we drove us the additional 2 miles up the mountain, set us up with our mountain bikes, reviewed all the navigation and safety instructions, made sure we were comfortable with our map, and then sent us off on our own self-guided down 18 mile trip down the mountain!  Most of the trip was downhill, so the pedaling part was super easy. The challenge was that you you could build up a lot of speed going down, so maintaining control of your bike while riding a dirt/gravel bike path required some effort! 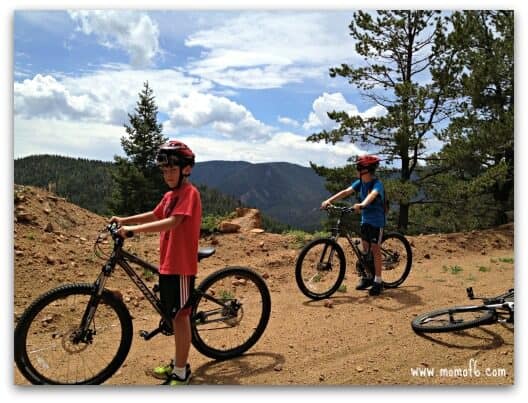 The views were amazing, and although my heart was in my throat during parts of the trip, I was really glad that we did this. The route took us through four tunnels and at one point we have walk our bikes on a steep path over a collapsed tunnel. The first 10 miles of the tip was on a path that was not used by motorists- and we only saw 2 or 3 other people there the entire time. The last 8 miles was on a road that was sometimes dirt and sometimes paved, but the motorists are aware that the road is used by bikes so they drove slowly. 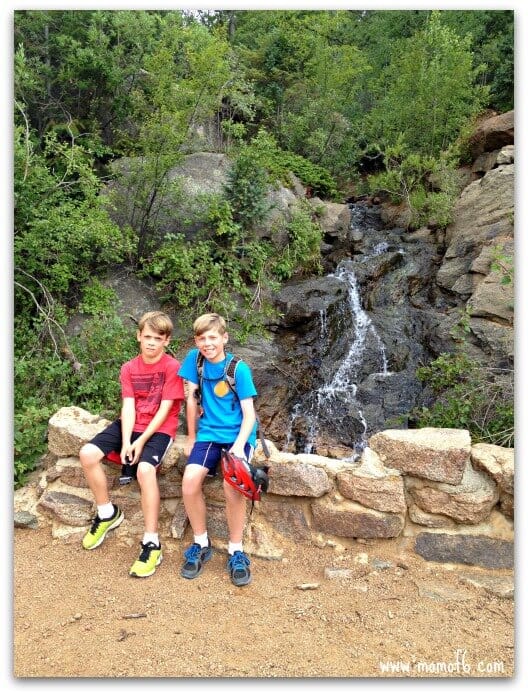 We wanted to stop and take more pictures along the way, but we could see the clouds were darkening over the mountain, so I wanted to get us back to the bike shop before we ran into a rain storm. And while we didn't miss the rain entirely (the last 3- 4 miles we rode through a light but cold rain that made it difficult to see where we were going), we did miss the lightening that came later. My boys loved that Gold Camp bike trip down the mountain (they probably could have skipped the horseback ride) and I was super proud of myself that I had accomplished this trip with them!

We spent our last morning in Colorado Springs week touring the US Olympic Training Center which was really amazing. Our tour started with a film that recapped the past summer Olympics in London and winter Olympics in Vancouver, and it made me just so emotional watching it!  We caught a glimpse of the mens gymnastics team training, and we also got to see the pool where Michael Phelps, Ryan Lochte, and Missy Franklin trained, and heard stories about how the trainers at the Olympic Center knew that Michael Phelps “was going take home a big pile of medals from the Beijing Olympic”s because one of the techniques they use to train swimmers is to put them in a harness and pull them through the water at the speed of the World Record time for their event, and with Michael Phelps- he was the only swimmer that had slack in the line when he was being “pulled”! I loved hearing the stories and seeing where the athletes train! 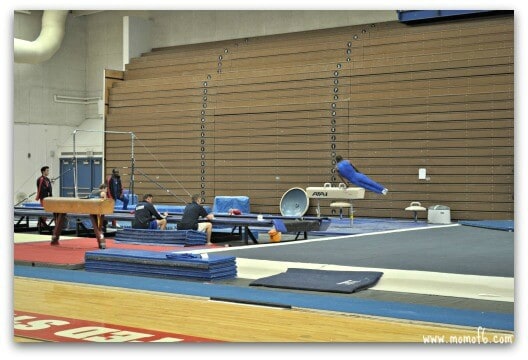 In the afternoon we drove through the Garden of the Gods park which is a beautiful area of town where the jagged red rocks have been pushed up from the earth's crust and then sculpted with water and wind over time to create these amazing formations. It was awesome to drive through the park, pulling over at times to take pictures or even scramble over some of the rocks. 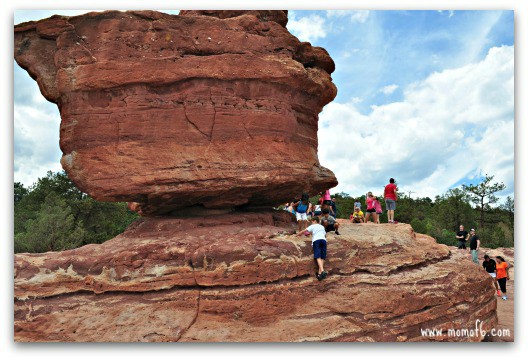 My family really loved our stay in Colorado Springs, and can't wait to come back and visit again because there is so much to see and do here, that we barely even scratched the surface! I created this video to show you the top 5 things for families to do while visiting Colorado Springs….