Gettysburg is a city rich in history with lots for kids to see and learn, and also has some fun things to do. Here's why you should take a family road trip to see Gettysburg with kids! 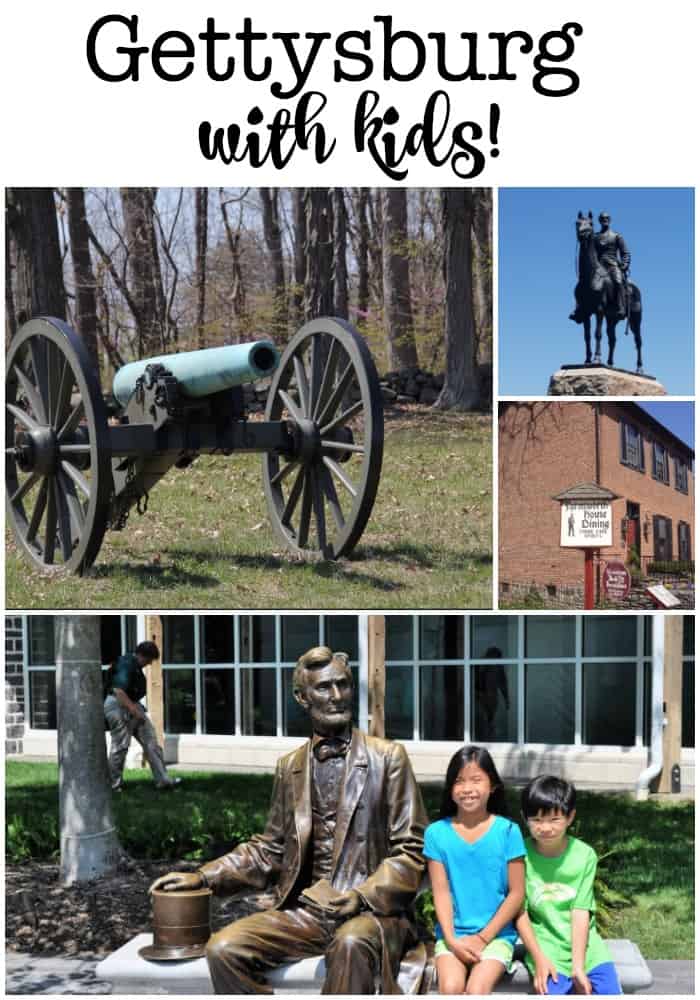 I've been wanting to take the kids to visit a place to learn some of our country's history- where they could immerse themselves in a living exhibit and really get a sense of what it took to form this country and make it free.

I had thought about Boston (Freedom Trail, Boston Harbor, Salem Witch Trails), Williamsburg (Colonial life, Jamestown), or Philadelphia (Independence Hall, Liberty Bell, Franklin Museum)- but in the end, we were given the chance via Trekaroo to travel to Gettysburg, PA which gave us the perfect dose of history as well as a fun family vacation!

And throughout our trip we jumped back and forth between historical and non-historical activities.

Dinner and Exploring in the Town of Gettysburg

For dinner I wanted to take the kids to an authentic Civil-War period restaurant, at an inn decorated true to the time period, food that matched what guests would have dined on in the past, and servers that dressed in costume and who could explain to the kids some of the old food traditions.

We chose to eat at Farnsworth House Inn, a historic bed and breakfast and restaurant that was built before the Civil War. The house sheltered Confederate sharpshooters during the battle of Gettysburg, and the Lincoln procession passed by the Farnsworth House on the way to the National Cemetery to deliver the Gettysburg address on November 19, 1863.

One of the things that my kids found to be so fascinating is all of the bullet holes on the side of the brick building, a testament to the Inn's witnessing the historic battle.

We enjoyed a nice meal- and the kids and I tried pickled watermelon rind and southern spoon bread served with apple butter- a few authentic dishes from the past!

The town of Gettysburg is nice to walk around on a summer evening. We passed many people working in authentic costumes- and we even spotted some folks gathering for the nightly ghost tours. (My kids were too young to want any part of that idea!) 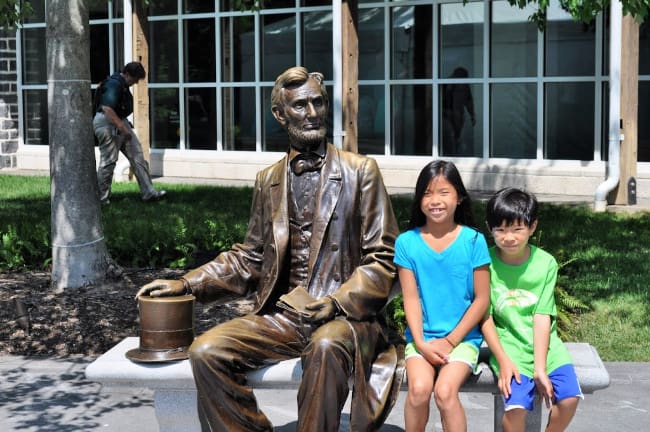 The next morning we delved into the history of the battle at Gettysburg with a stop at the Gettysburg Visitor's Center.

We happened to visit during the 151st anniversary of the battle (July 1-3, 1863), so there were lots of events going on at the Visitor's Center, including activities geared for kids to help them to understand what it would have been like to live as a soldier during the Civil War.

My kids learned what kinds of games the young men played during their “time off”- such as jacks and cards. They had the chance to taste the food rations- such as hardtack biscuits, try on uniforms, and inspect (unloaded) weapons.

Once inside the Visitor's Center, we purchased tickets for the multi-media experience that gave us a good overview of the reasons why our country experienced the Civil War and the battle of Gettysburg itself. With my kids spread out between 3rd-9th grades, this was a great introduction for the younger kids and a very interesting review for my older ones who had learned about it in school but now could understand it better and learn more. 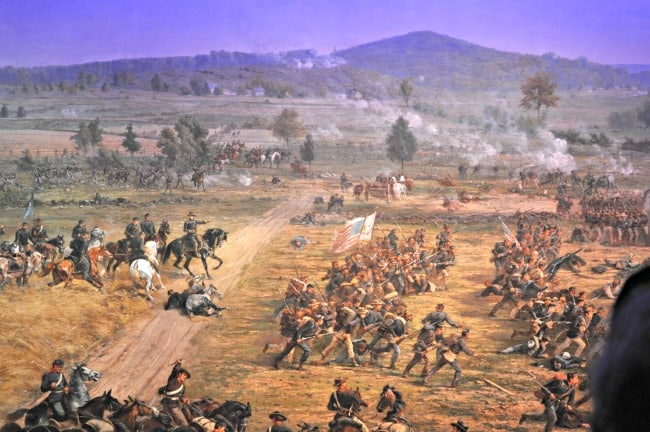 There was a fantastic film narrated by Morgan Freeman followed by a visit to the Cyclorama- a huge 360-degree painted mural that comes to life with light and sound presentation.

One of the things that really stuck with my kids after seeing both the film and cyclorama is how much the town of Gettysburg was affected by the aftermath of the battle- with 51,000 soldiers left dead, injured, or missing. The dead outnumbered the townspeople by 4 to 1, not to mention the destruction of property, the dead horses, the guns, cannons, and ammunition- it took years for the town to recover. And of course, we made comparisons to what towns and villages today around the world face that are ravaged by war.

It gave the kids a whole different somber perspective.

The Visitor's Center offers some great options to see the battlefields- you can sign up for a bus tour, or you can hire a tour guide to hop into our car and give you a personalized tour of the surrounding landmarks.

But worried that my younger kids wouldn't have patience for too many more “history lessons”, we opted to do the self-driving auto tour for about an hour, so the kids could have both a sense of where the battle took place, but also to see the hundreds of monuments erected by the various states who sent men to fight the battle.

Fun in Gettysburg with Kids 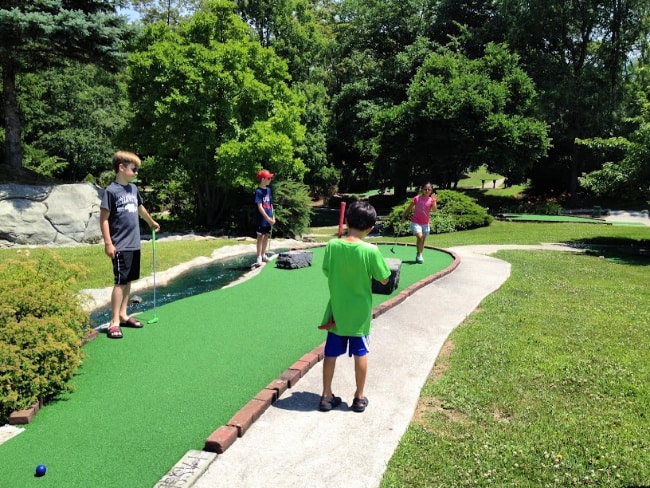 We filled the rest of our visit with fun family vacation activities- we played a round of mini golf, and we also we drove to the nearby town of Hanover and took a factory tour at the Utz Potato Chip Factory (so fun to watch how the potatoes turn into chips!), and stopped by the Utz factory store afterwards to pick up some snacks!

All in all- it was a great way to learn a little US history and have a fun time together as a family!