Like every Mom of teens and tweens, I often feel the push-pull of trying to figure out what is okay for them to do on their own now and where I should still be setting limits and restrictions. I keep wondering where the instructions manual is when it comes to making parenting decisions like these: Are my teen boys ready to ride their bikes on the main roads of our town (35 mph speed limits and no sidewalk alternatives)? Are my tweens ready to stay home alone while I run out to the store? How about when I attend an older sibling's soccer game an hour's drive away? Are the kids allowed to use the microwave if I am not home? And if I say yes to that- what about using the stovetop? PG-13 scary movies- yay or nay? The list seems to go on and on.

How do we figure out when it is time to get on with the business of letting them grow up? 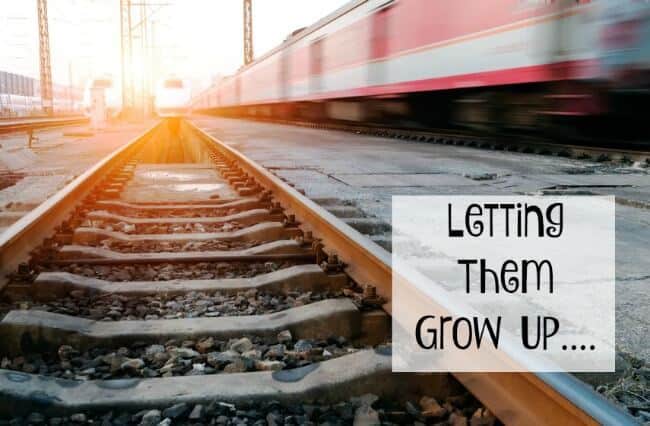 Now I know, I know, I know… that it's all about the individual child and knowing their personality, their maturity level, their judgments demonstrated thus far.

And I know that there is no magical age in which any of my kids are “automatically” allowed to do any of these things.

But even when you do know your kids.. when you believe they are capable of the next step- it can still be so hard to say “yes” and let them try- when you know that the consequences of these decisions are big and real.

A Story About Letting Them Grow Up…

Take this summer situation with my oldest son. He had been accepted in a mentorship program to work in a science lab at a prestigious institution about a 45-minute commute away from our home. He was 15. He didn't yet drive. And while we are blessed with trains where we live- this location was not anywhere near any of the train stations that connect to our town. For me to drive him back and forth to work every day was going to eat up at least 3 hours of my time- which would then become my own part-time job all summer long!

So my husband and Kyle figured out a system where Kyle would commute to my husband's office every day with him, and then take the subway from Steve's office to the lab.

Now here you can cue my NYC-Mom-friends who shrug this off as no big deal. Their kids commute alone on the subways as tweens.

For me- this was a total stomach-churning decision. But at the same time was truly a non-decision. He was 15. Of course, he can handle this- with a little preparation, right? This is one of those things that is part of growing up- learning to navigate the world on your own. I knew deep down that he was ready for this (even if I wasn't).

Kyle felt comfortable he had this all handled.

And he totally did. Except maybe not the way he had hoped.

On the first day- he got on a subway that didn't run all of the way to his desired station. He reached the end of the line and heard the announcement that he needed to get off of the subway because the train was done running. What did he do? He got off and found a subway employee who explained how to read the information posted on the outside of the car so that Kyle can make sure he always gets on a train that goes at least as far as his stop. And the guy even helps him figure out which train he needed to take to get to where he needed to go.

A- for Navigation. A+ for problem-solving!

Then the next day he does fine going into work, but somehow gets on the completely wrong subway line heading back to Steve's office. So he gets off the subway and calls Steve- who happens to be working in the city that day- so he tells Kyle to hop back on and agrees to meet him at a specific stop near to where Steve was working.

But they fail to set a specific place at that stop to meet- Above ground? Below ground? Near which exit? This might not have been a problem… except the battery on Kyle's phone was out of juice so he had no way to reach Steve once he arrived at the station.

So what did Kyle do? He located an NYC police officer outside of the subway station and explained that he was supposed to meet his father there, but they didn't coordinate an exact location and now his phone was dead. The officer lent Kyle his phone to use to call Steve and they quickly found each other.

B- for Navigation. A+ for problem-solving!

And isn't that what it is really all about?

Not so much that he mastered or didn't master the whole subway commuting thing… but that he knew how to work through whatever problem he found himself in? Isn't that what we want for our kids to learn before they head out into the world? How to handle whatever life throws at them, seek help when needed, and then move forward?

It's exactly what we want!

I have to admit- I was really proud of how this all worked out. Even more than I would have been if he had he not failed.

But that doesn't mean that I suddenly became comfortable with letting go and allowing my kids to stretch their wings! Even more situations presented themselves these past few months that taught me a lot about parenting tweens and teens and learning to allow them to grow up. But this post is a getting a little long- so click over here to read more!