Crazy 8's is a family card game favorite at our house, and kids as young as 4 can easily join in on the fun if they understand the concept of the card's suit (which you explain using the pictures of diamonds, hearts, clubs, and spades) and how to match numbers (ranks). Here's how to play crazy 8's with your kids! 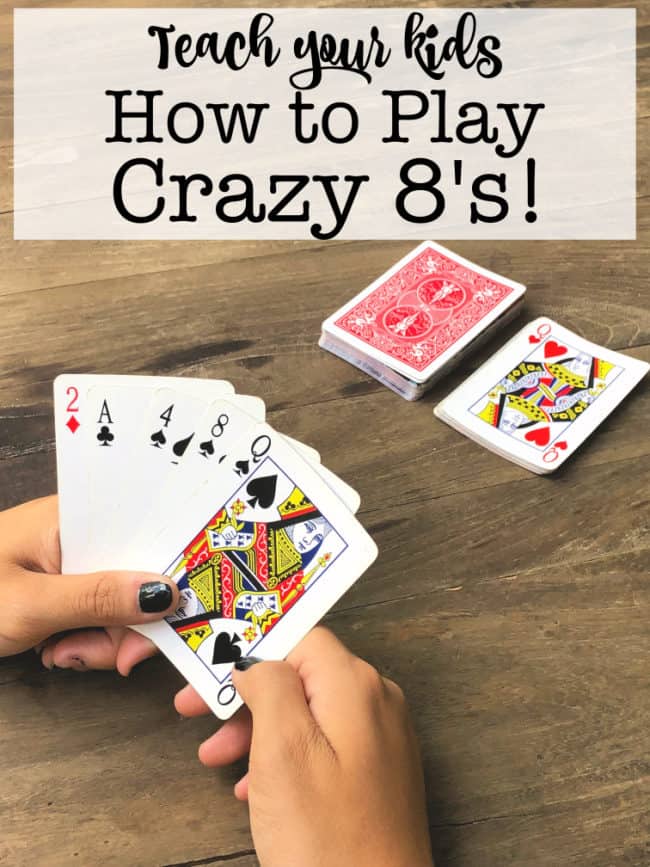 Of course, card games sometimes do have their challenges… 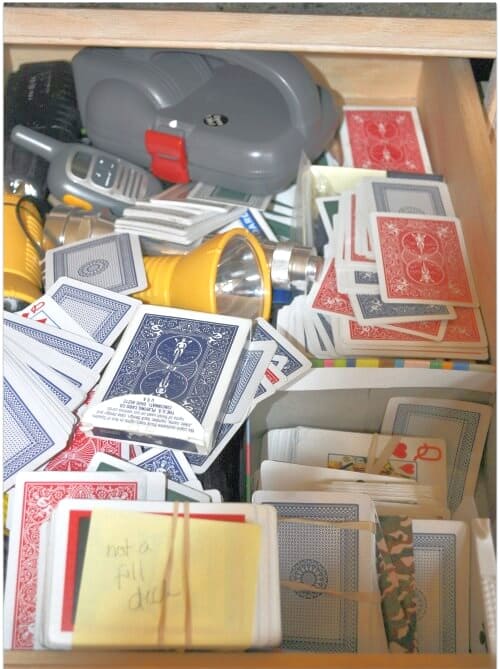 Every time my kids want to play a card game, I open this drawer to pull out a deck, and find this mess!

And yes, they know that they are the ones that leave it like this!

So the first step (at my house anyway) is to grab a big pile of cards and then start grouping them into suits to see if we can actually put together a complete deck!

And I might suggest that once you assemble a full deck, have an older sibling or adult conduct the first shuffle and be the dealer. Otherwise the game will go by very quickly as every player will just have the next card in the suit!

To play Crazy's 8s, deal five cards to each player.

The rest of the deck is placed in the center of the table, face down.

Take the top card from the deck, turn it over and place it beside the deck, forming the discard pile. (If the first card turned over is an eight, put it back on the bottom of the deck and turn up the next card.)

Step 3: Agree on the Rules of the Game

Here is how to play Crazy 8's:

The player to the left of the dealer discards a card from his hand that matches either the suit or the number (rank) of the top card in the discard pile.

If he has no such card, he takes one card from the deck, which he can either play (if it matches either the suit or the rank (number) of the face-up card), or he must add the card to his hand.

Play continues in the manner, with players matching the card at the top of the discard pile, or taking a card from the pile.

Eights are “wild” and can be put down at any time by the player who is taking a turn. The player who discards an eight chooses the suit his opponents must play next.

If a player discards a 2, the player to his left loses a turn and instead must take 2 cards from the deck.

If a player discards a 4, the player to his left loses a turn and instead must take 1 card from the deck.

The first player to use up all his cards wins.

Sound easy, right? But there is a point of large dispute here in the Rowley household on the exact rules of the game. See the hand below? 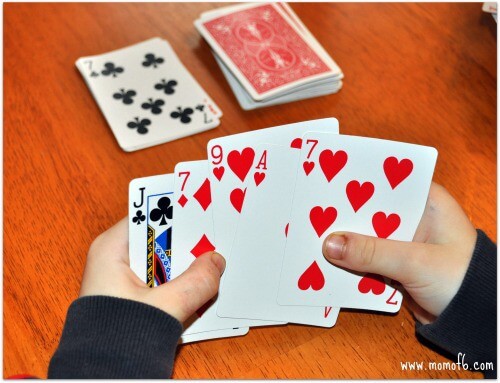 The card that is face up is a 7 of clubs. Now the way that I play (which of course we ALL KNOW is the “right way”!) is that the player has the right to decide based on strategy whether or not to discard his Jack of clubs, or either of the 7's that he is holding.

Strategically speaking, it would be in his best interest to discard the 7 of hearts, in the hopes that by the time his turn came around again, hearts would still be the suit being played, and he would have another opportunity to discard.

The way certain grandparents that I know play- is that the player has no choice. Suit must always be played before rank. And therefore, the Jack of clubs is the only option.

My view is that a card game should be based on strategy and not only by chance. (Of course, I am smart enough to keep quiet about it when the grandparents are playing with the kids and I am using the opportunity to get something else done!)

But the choice of rules my friend is yours to decide. 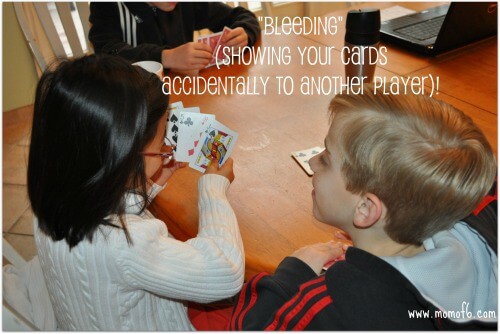 We try to teach the younger kids how to hold their cards so that others cannot see what is in their hands. The older ones will admonish them with “No bleeding!” and the little ones know what to do!